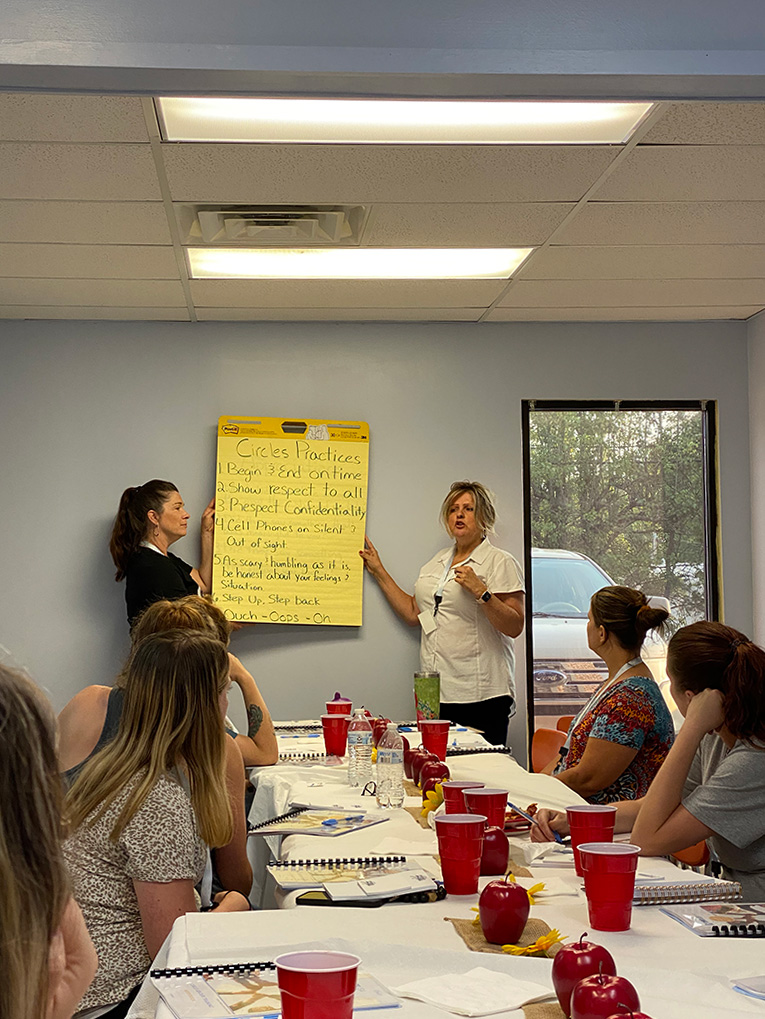 UCHRA/Empower UC staffers, Heather Thomas and Balinda Westmoreland, go over the rules of Circles meetings and the expectations of all participants.

In the months since being named one of seven collaborations selected from across the state to receive $25 million in TANF Opportunity Act funds, Empower Upper Cumberland has hit the ground running; hiring key positions and hosting the state’s first Circles Chapter meeting.

While Empower UC anticipates an official launch on Nov. 1, the program, led by Director Megan Spurgeon, has already begun identifying and serving eligible families through their current two-generation (2Gen) program, TEAM, by implementing Circles meetings. Empower UC plans to establish eight hubs throughout the Upper Cumberland, with a chapter in each hub, in order to serve clients closer to their homes.

The Cookeville/Putnam County Circles is the first Circles chapter in the state of Tennessee. In the coming months, Empower will establish coordinated service hubs that serve families in Warren County as well as hubs that serve the following combined counties: Cumberland and Fentress counties, Macon and Clay counties, Smith and Jackson counties, Pickett and Overton counties, DeKalb and Cannon counties, and White and Van Buren counties.

“We could not be more excited about Empower Upper Cumberland launching the first Circles USA Chapter in the State of Tennessee,” said Megan Spurgeon, Empower UC Director. “Our team has worked incredibly hard to get the chapter up and running and they have done a phenomenal job in bringing this opportunity to families in Putnam County.

“Circles is completely unique to anything that is currently occurring in Tennessee,” Spurgeon added. “This relationship-based program between low-income and middle to high-income volunteers will be critical to families reaching their goals.”

Empower Upper Cumberland is currently accepting applications for volunteer allies to serve as mentors in the lives of families that are a part of the first Circle Chapter in Putnam County.

Circles USA gathers middle-income and high-income volunteers to support families on their journey out of poverty. By being surrounded by people who have landed jobs, negotiated leases, or managed credit card debt, people experiencing poverty are more equipped to achieve long-term financial stability. According to Circles USA, participants achieve a 39 percent increase in income after six months and a 78 percent increase in income after 18 months. Participants also continue to increase their income beyond that 18-month period.

“Circles USA is thrilled to support Empower UC to implement a multi-county drop-in of the Circles model to move their families from surviving to thriving through intentional friendships, training, and local partnerships,” said Kamatara Johnson, Circles USA Executive Director. “By putting our struggling families in the center of the circle, we can co-create high-impact solutions for Upper Cumberland, finding solutions for rural economic development and building stronger communities together.”

To be eligible, families must have children under the age of 17 in the household, be at or below 185 percent of the federal poverty line and be willing to commit to Thursday evening weekly meetings. During the meetings, dinner is provided along with activities for the children in attendance. The parents that attend these meetings work through a curriculum that focuses on soft skill development, goal setting and planning, budgeting, and increasing their connections to their community.

Visit www.empoweruppercumberland.org to learn more about Empower UC, its partners, and ways to get involved.